Did you receive this issue as a forward?

Consider subscribing using the link at the bottom of this email!

Vancouver deputy police chief came back from a field trip to California with some big questions.

Date: Thursday, October 20, 2022 I would like to express my appreciation to the Policing and Security Branch of the province’s Ministry of Public Safety

A long-awaited apology ceremony for an Indigenous man and his granddaughter who were wrongfully handcuffed outside a bank in Vancouver will not be going ahead as planned Monday after the two arresting officers decided not to attend.

Family, friends, colleagues and strangers in B.C. and beyond continue to mourn the death of Const. Shaelyn Yang, an RCMP officer who was killed on duty last week in Burnaby.

Khelsilem of Squamish Nation: ‘I'm very excited about the future ahead’

Councillor Courtney Walcott is stepping down from the Calgary Police Commission.

The Moose Jaw Police Service (MJPS) presented its monthly budget update during the Board of Police Commissioners’ Oct. 19 meeting. The document described the organization’s revenues and expenses from January to September. 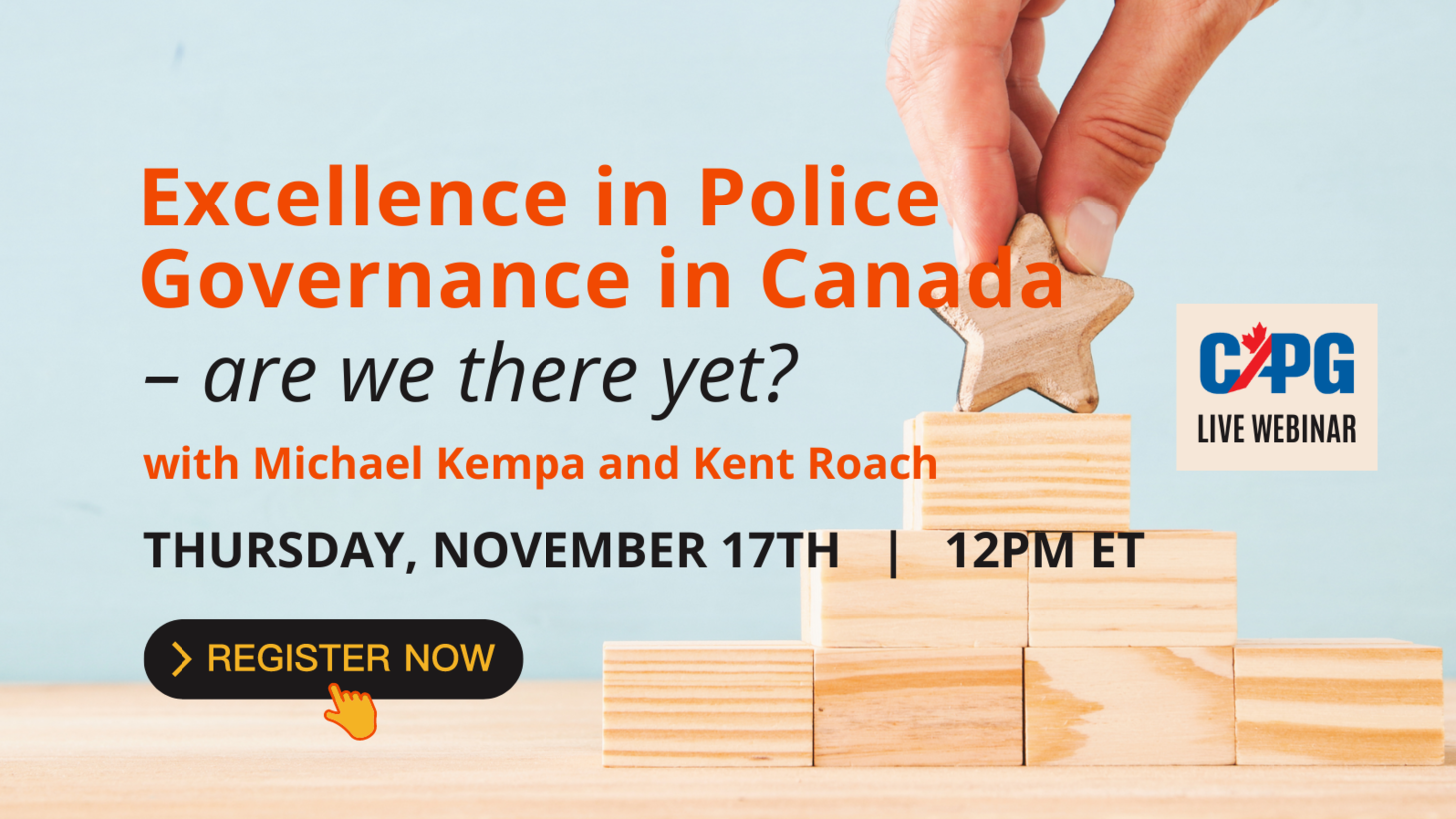 NOVEMBER WEBINAR Excellence in Police Governance in Canada – are we there yet?

REGISTER NOW for this month's webinar with Michael Kempa and Kent Roach on Thursday, November 17th at 12 pm ET

A widow’s plea: ‘Please respect our police’ | The Star

A slew of policing killings — including constables Morgan Russell and Devon Northrup — should open some eyes to the very real perils that cops face.

Who is on the Ottawa Police Services Board and what are its responsibilities? | Ottawa Citizen

The interim chief of the Ottawa police says the force did not properly consider how the demonstrations that gridlocked the city for nearly a month last winter were weighing on residents.

The incident commander in charge of the protests in Ottawa last winter allowed trucks to park in front of Parliament Hill because he thought that would protect the rest of the city from disruptions, according to documents table with the Emergencies Act inquiry this morning.

Thunder Bay's mayor will have a seat on its next police services board. Here's what candidates say they'll do | CBC News

With a municipal police force that's been under heavy scrutiny and pressure for years, with internal divisions and external investigations, Thunder Bay's next mayor will have a lot of work to do. Here's what the candidates are promising.

Ken Boshcoff is once again Thunder Bay's mayor, and he's got a lot of challenges ahead | CBC News

In a tight two-way race to become Thunder Bay's next mayor, long-time politician Ken Boshcoff prevailed. But he's got a tall order on his hands, with many decisions and issues waiting to be addressed.

The mayor and 25 newly elected councillors will have to quickly come to grips with a host of problems when they first meet in November.

The police budget is one of Toronto's largest expenses. Here's what you need to know about it | CBC News

Few financial issues in Toronto have received as much attention in recent years as the amount of money the city spends on policing.

The decision won’t put an end to racial profiling overnight, Judge Michel Yergeau wrote in his ruling, but the court is giving the province six months to adjust laws so police can no longer pull people over without a reason such as a traffic infraction.

The inquiry into the Nova Scotia mass shooting has released partial recordings of a tense RCMP meeting at the centre of allegations of political interference into the police investigation of the massacre.

A call to add 25 more Codiac Regional RCMP officers next year has shifted to a slower approach, spreading the increase over three years.

The Royal Newfoundland Constabulary will ensure its members have anti-racism training, adding that it will review its policies and work to repair its relationships with Indigenous communities

The toll of police work | The Star

Police officers will always be required to engage in high pressure, traumatic situations. We’ve asked police for much more than they’re able to give.

RICHMOND, Va. (AP) — The police chief in Virginia’s capital city resigned Tuesday after months of scrutiny for comments he made about an alleged shoot...

No spam, ever. We'll never share your email address and you can opt out at any time.